What is Dengue Fever?

Dengue Fever is a viral infection spread through the bite of an infected mosquito. It is estimated that 50 million cases of dengue occur every year throughout the world.

Symptoms can occur 4-7 days after infection and include the sudden onset of high fever and headache with joint and muscle pain, nausea and vomiting.  After 3-5 days a rash usually appears as the fever subsides. The more serious  and less common (about 1% of patients develop DHF) progression of the disease is Dengue Hemorrhagic Fever which causes bruising, nose bleeds as well as internal bleeding and can be fatal.

Where is Dengue found?

The virus is most common in South East Asia, the Western Pacific and Africa.  There have also been more and more cases reported in South and Central America, the Caribbean, and Eastern Mediterranean.

It is estimated that 50 Canadians get dengue each year.

Who is at risk?

Travellers to endemic areas are at risk. Dengue is geographically spread similar to malaria but can be found in populated urban and residential areas of tropical countries.

Dengue is more dangerous for children under 15 and for those with immune problems.

Is there a vaccine?

There is no vaccine to prevent Dengue Fever.

The bite of one infected mosquito can result in infection. Mosquitos may feed at any time however the risk is highest during the early morning, several hours after day break and in late afternoon before sunset.

Mosquitos carrying this virus typically live indoors in dark, cool places such as closets, under beds, behind curtains and in bathrooms.

When travelling to endemic areas travellers are advised:

If a fever develops within 2 weeks of your trip to the tropics, seek medical attention and tell you doctor about your trip.

*Please Note*International travellers risk of dengue infection varies depending on transmission in the area as well as exposure to mosquitoes. You are at greater risk when an outbreak or epidemic is occurring. Please consult with a travel nurse prior to travelling 250-370-2366 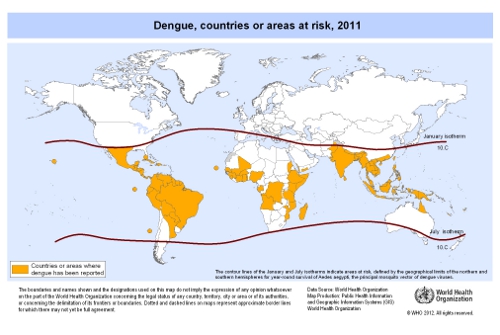