Poliomyelitis is a disease caused by an infection with a virus.  Transmission is through fecal to oral or oral transmission.  The most common form of transmission is through eating or drinking contaminated (by feces) food and.or water.  Infection occurs in the oropharynx, gastrointestinal tract and in the central nervous system causing paralysis and difficulty breathing.

Where is it found?

Poliovirus was common worldwide in the pre-vaccine era.  In 1994 Canada and the rest of the America’s were considered to have been eradicated from the poliovirus due to the inactivated polio vaccine.  The last wild poliovirus associated case (in the America’s) was detected in 1991.

There are however 4 countries where poliovirus is still in circulation: Afghanistan, India, Nigeria and Pakistan.  Although progress has been made to eradicate polio worldwide there is still a risk of imported cases.

Who needs to get vaccinated?

Vaccination is free! polio is a publicly funded vaccine.

Vaccination is recommended for travellers to polio-endemic areas and to their neighbouring countries.  These areas include some countries in East, Central and West Africa, Eastern Europe, and Northern and Southern Asia.

You may require a dose of Inactivated Polio Vaccine (IVP) if you are going to areas where polio is present and you have no been vaccinated before or if you have not had a one-time booster against polio.

Please see the map below for polio-endemic areas. 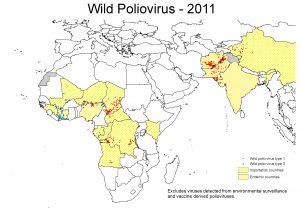 For more information please see Travel Health or come in to the office for a personalized consultation with one of our travel nurses.